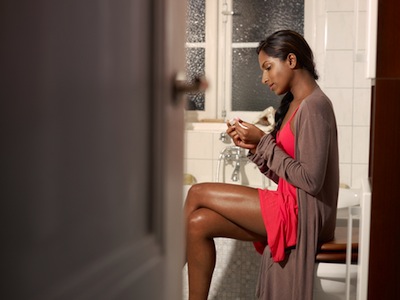 Undoubtedly, you’ll be learning an entirely new pregnancy-related vocabulary over the next nine months.  One of the new words, or acronyms in this case, you’re bound to come across is hCG.  hCG is short for human Chorionic Gonadotropin, which is a hormone that your body produces during pregnancy.  Here are the facts:

hCG can be found both in the blood and urine of the mother.  Your body will produce enough hCG to accurately determine a pregnancy usually 12 days after conception.  It’s best to wait two weeks or so after conception in order for the levels to increase enough to be detected by the chemical test.  In most pregnancies hCG levels continually double about every 72 hours until the 8th or 11th week.  After this point, this hormone maintains a steady level, or may decrease just a bit.

The mIU/ml unit stands for milli-international units per milliliter.  A positive pregnancy test looks for levels above 25 mIU/ml.

In a normal pregnancy, it is typical for hCG levels to vary widely.  It’s important to note that these levels are calculated for the gestational age; this means that 3 weeks refers to the number of days after conception.  Here are general guidelines to chemical pregnancy hcg levels during pregnancy, according to the American Pregnancy Organization:

Although hCG rates vary widely among women, very high or low levels may indicate a problem.  If a test returns high or low readings your OB or midwife should monitor levels over a 72 hour period to determine whether the initial reading is stable or changing.  High hCG levels can result from a molar pregnancy or a multiple pregnancy.  High readings may also occur because of a conception miscalculation; you may in fact be further along than initially determined.

A low hCG reading can also result from a conception miscalculation; in this scenario you are less along your 40 weeks than initially estimated.  However, it can also indicate an ectopic pregnancy or miscarriage.  If low levels persist, your OB or midwife will likely conduct further tests, including a sonogram to determine possible causes of low levels.

Your healthcare professional will not likely check chemical pregnancy hcg levels throughout your pregnancy.  Exceptions to this guideline include if you begin experiencing bleeding or if you’ve previously miscarried.

While home pregnancy tests can alert you to the presence of hCG in your urine, blood tests can return more accurate numbers.  The most important thing to remember regarding normal hCG levels is that “normal” refers to a very large range of numbers.  If you have concerns, you should speak with your OB or midwife.

Cloudy Urine in Pregnancy -Issue or not During My Early Pregnancy?

What are the Signs and Symptoms of Implantation? – Pregnancy Tips