It is such an excruciating experience of nine months for expectant mothers as they go through a physical and emotional change altogether. Not only this, they are more prone to various viral and bacterial infections too as compared to other people. So, I have discussed here the common viral infections during pregnancy that pregnant women should be aware of.

There are a lot of viruses and infections which a pregnant woman and her near and dear ones should be aware of. Here is a short list of most notorious ones:

The Chicken Pox, also known as Varicella virus, can be dangerous and cause serious complications both for the mother as well as the unborn baby. Even though pregnant women rarely get chicken pox, as most of them have had it during their childhood only, however, if the expectant mother never had chicken pox before, the probability of catching it during pregnancy arises a lot. If happened, Chickenpox can further lead to the following complications:

But do not start biting your nails yet, because most of the pregnant women recover easily from chicken pox with no serious repercussions on the baby or mother herself. With antiviral therapy and improved daily care, mother and baby both can stay safe. But the word intensive needs to be put before care, in bold, capital letters.

Cytomegalovirus (pronounced sy-toe-MEG-a-low-vy-rus), or CMV, is a common virus which comes under the herpes virus banner and infects people of almost 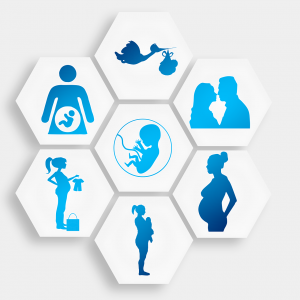 every age at some point of their life. Though it is usually harmless, but the tricky part is that it never or seldom shows symptoms until it is in its full power to start affecting the body.

This virus can be transmitted to the unborn baby too and it is called congenital CMV infection. Around one out of every one fifty newborn babies carry it since their birth. Though as said earlier, it does not cause much problem during pregnancy period but the babies born with this virus may have some complexities like visual impairment, hearing loss, small head size, seizures etc.

Since this virus believes in a silent game-play, babies with congenital CMV infection must be closely observed and regular checkups should be followed without any gaps.

Hepatitis is basically the name given to the swelling which occurs in the liver due to this virus. Across the globe, around 350 million people and in the United States only about 1.2 million people are currently infected with Hepatitis B. Yes, it is highly contagious and likes to make itself at home in the body for the rest of your life.

It can also be transmitted to the baby from the mother who has got this virus and there is a 90% probability of it being a lifelong, chronic infection. So a routine checkup of expecting mothers is very much necessary during the pregnancy period. And it should be noted down that as per CDC recommendations, within twelve hours, the newborn babies should get the HBIG shot and the first dose of Hepatitis B vaccine.

However, this virus does not spread by breastfeeding, cooking, eating, hugging and kissing.

Hepatitis C virus mainly causes liver malfunction and hits mostly the people of age group belonging in between 20 to 40 years. It is infected through the exposure to transfusions, contaminated needles, or injected drug use. It seldom shows any symptoms but usually, you can go to get yourself checked if you feel like you might throw up (nausea) or if you observe yellow skin and eyes (jaundice). The human body has a tendency to clear the virus on its own, but more than often this virus lingers in the liver.

Around one to twenty women pass this virus to their baby. However, there is no deterrent method available right now in medical science to stop the transmission of this virus from the mother to infant. So the antiviral drugs are given to the newborn baby immediately.

This virus does not affect adults more than just a mild infection but it can cause serious complications for an infant. A sensitive type in nature, this virus can be transmitted to the baby on a mere indirect contact with a person having an active cold sore. When babies up to 28 years old are infected, it is referred as neonatal herpes. It can cause eye or throat infections, damage the central nervous system, harm the mental balance, or in some cases even lead to death.

The only preventive method to stop the transmission of this virus is to protect the baby from HSV in the canal area during delivery. Blisters and ulcers in vaginal areas should be brought notice to the doctor by the pregnant mother well in time.

At last but not the least, it’s HIV which should never be taken lightly. HIV stands for Human Immunodeficiency Virus. As known widely, it causes AIDS (Acquired Immunodeficiency Syndrome). A person may be “HIV positive” but not have AIDS in early stages.

According to the website HIVRNATest.Com, About 8,500 women living with HIV give birth to a new life every year. Although scientific progression made in medical research since the early 1990’s and taking preventive treatments from 28 weeks of pregnancy have made 90% of pregnant women with HIV to give birth without transmitting this virus to their babies. The transmission from mother to child during pregnancy, labor, delivery or breastfeeding is called perinatal transmission.

These are the examples of the viral infections during pregnancy that every pregnant woman should know and be aware of.